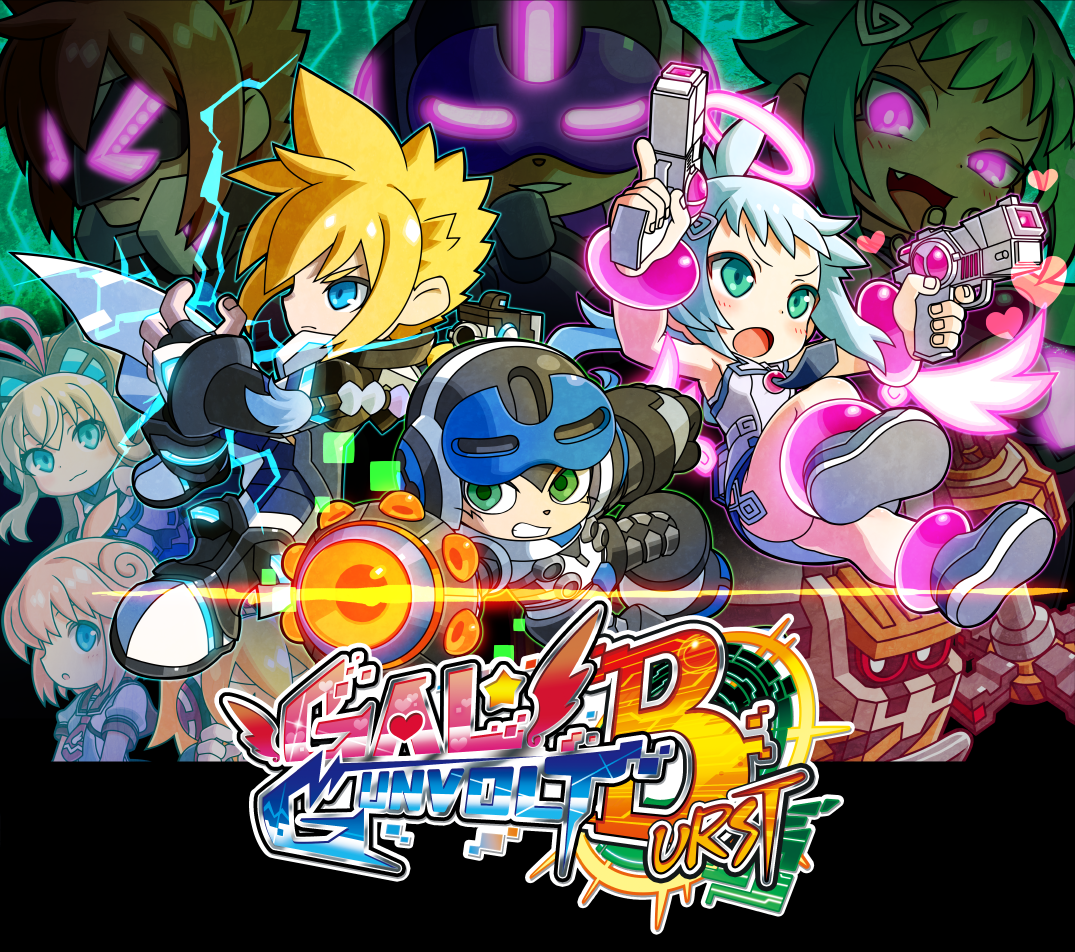 
The fourth major content update to Mighty Gunvolt Burst is here, and with it comes a brand new DLC playable character: Tenzou! Tenzou is the original protagonist from the very first Gal*Gun game, and the source of the Super Popular Legend that spread around Sakurazaki Academny.

He is armed with the Blaster Goggles that fire powerful beams of light known as the Pheromone Shot! Angels Patako and Ekoro help him traverse this virtual world with their Doki Doki Mode and Angelic Guidance abilities. Gal*Gun fans won’t wanna miss the chance to play as the original protagonist in his first English appearance!

* Nintendo Switch Only: Support for new DLC has been added.

* Nintendo Switch Only: Usable save slots have been increased from 8 to 40. New save slots can be accessed by changing pages on the file select screen.

* For the various effects and actions affected by the current Burst Combo, they will now change according to the following:

* The power of Gunvolt’s “Voltaic Chains” ability has been increased.   At Lv.1, it will now surpass the power of “Luxcalibur.”

* The power of the charge attack on Copen’s “Brave Horn” EX Weapon has been increased.

* RAY and Copen are now able to acquire the following rare item (treasure): P-PS MIAPLACIDUS  (Module which allows the use of STATIONARY FIRING)

* The following issues have been fixed:
* In some cases, destroying enemy bullets would incorrectly score points
* An incorrect edit item was present under Beck’s MINE bullet type.

Various other issues have been fixed to improve game experience.


Since most of these updates are already present in the Playstation 4 version, there’s not much in the way of patch notes here, but the previously unavailable heroine characters Call and Joule are now available along Tenzou in the new “Heroines” DLC character pack!

As Call, utilize your Barrier to protect yourself from harm, and find Patch robots throughout the stages to add to your team, greatly raising your offensive capabilities!

As Joule, you turn your repertoire of songs into different bullet types that can be used in many types of situations! Activate the Anthem ability to to ignore CP limits for a short time, allowing Joule to equip any abilities she wants!

As Tenzou, use the Blaster Goggles to fire powerful beams of light known as the Pheromone Shot! Angels Patako and Ekoro help you traverse this virtual world with their Doki Doki Mode and Angelic Guidance abilities.

The Heroines pack, which contains all three characters, is available now for $4.99!

* The following languages have been added:

*The language can be changed in the OPTIONS menu, under LANGUAGE.

* In some cases while playing as Gunvolt, destroying enemy bullets would incorrectly score points

Various other issues have been fixed to improve game experience.