Profile:
Call is a female-type robot who works as Dr. Sanda’s secretary. Equipped with her combat backpack and bow gun, she dove resolutely into the VR world to save Beck.

Call can protect herself from attacks with her energy barrier. Throughout stages, she’ll find support robots called “Patches” that increase her attack ability.

Story:
Beck has been trapped in the VR world and fallen into an unending slumber. A surprising candidate came forward to rescue him: Call. Even though she was just a common robot, Call volunteered for this dangerous mission. Her creator, Dr. Sanda, hesitated to let her go alone, but decided to respect her decision.

And so Call set out on her mission to rescue Beck from the VR world!

Attack Style:
Call attacks with her bow-shaped gun. Its bullets can be customized to an extent.

Aerial Action:
Once she finds the special “aerial action” module, Call can choose from either an air dash or hover ability.

Unique Ability: Barrier
Call’s energy barrier can protect her from enemy attacks. Activating the barrier will drain her energy gauge. If it hits 0, the barrier can’t be used again until it’s fully charged. The barrier blocks bullets from every direction.  However, she can still take damage from contact with enemies and melee attacks.

Unique Ability: Patch Robots
Call will find Patch robots scattered around the stages. After collecting a Patch, it will follow Call around and provide assistance when she attacks. Finding lots of friends will help Call through the game’s stages! She’ll have to find them again when starting a new stage, however.

▲ Normal type Patches fly straight forward and return after colliding with an enemy.

▲ Homing Type seeks out an enemy to attack.

▲ Crusher Type catches an enemy and attacks it repeatedly. When this patch finishes an enemy, it always gets a Burst.

Fashionista:
With her “Costume Change” ability, Call can change her appearance. Hmm, where have we seen those outfits before…?

Profile:
Joule is Gunvolt’s guardian muse, making her debut as a playable character! She uses a variety of bullet types themed after her songs, each with special characteristics.

Joule’s Anthem allows her to exceed the CP limits of the customization system and let loose super-powerful weapons for a limited time.

Story:
As Gunvolt defeated the mastermind behind the VR world, he found himself trapped inside as it collapsed. In order to escape, he used his Septimal powers to create a new, parallel cyberspace.

However, a new hero takes the stage in this world.

Joule, regaining her physical form, begins a lone battle through this world…

Attack Style:
Joule attacks with the power of song. She begins with a variety of songs (bullet types), each with its own special properties. Her attacks may not be as flexible as other characters’, but by using them in the right situations, they can be very effective.

▲ A Flash of Azure – Joule’s default attack. A simple, easy-to-use shot that goes straight forward, but it lacks in range and rate of fire.

▲ Multi-Universe – An accelerating wave attack. It can pierce terrain.

▲ Iolite – An exploding scatter shot that fires in bursts of 3 and bounces.

▲ Indigo Destiny – A homing shot that divides in the air.

▲ Vast Circle – A shot of 5 bullets that rotate around Joule.

Aerial Action:
Joule is able to air-jump from the start. For a hefty CP cost, she can use her air-jump without limit.

Unique Ability: Anthem
As Joule defeats enemies, her special gauge slowly fills. When the gauge reaches half full, she can activate her Anthem ability. While the gauge is decreasing, Joule can ignore CP limits and use any custom equipment you have created! Create a powerful equipment in advance to make full use of Joule’s Anthem! Enjoy pure shooting freedom! 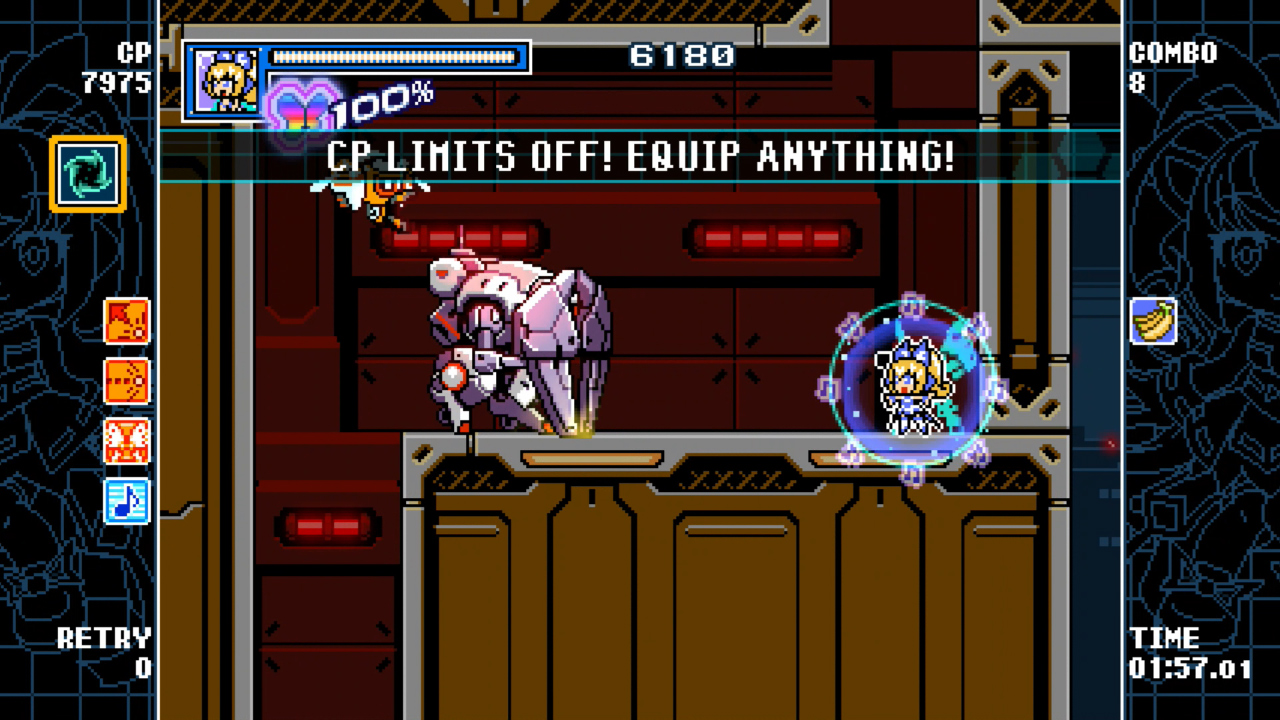