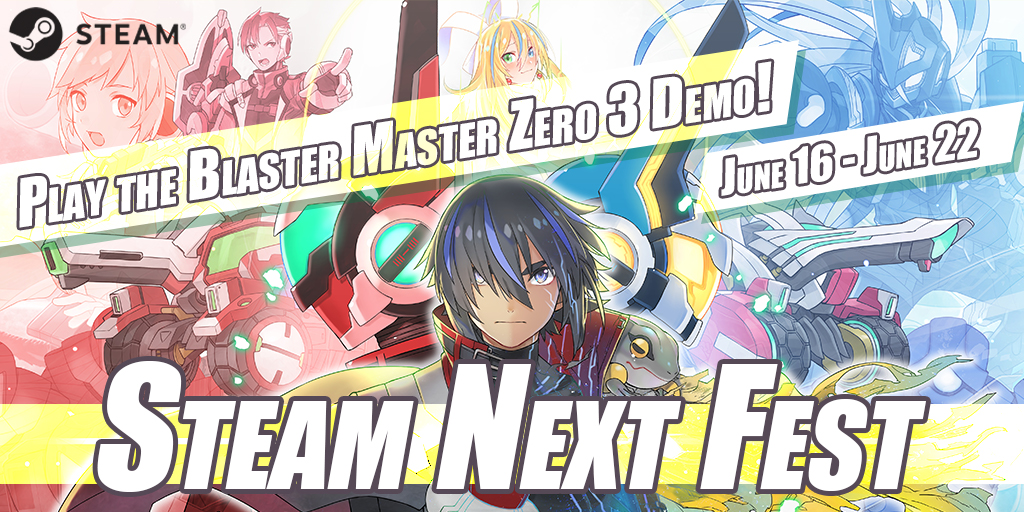 As Blaster Master Zero 3’s July 29th release date draws ever closer, we’re here to bring you all the latest updates and reveals! On our most recent Hangin’ at INTI HQ livestream, we gave you a sneak peek at the upcoming demo version of Blaster Master Zero 3 that will be available for all to play on June 16th during the Steam Next Fest, and today we have a special overview of Jason and G-SOPHIA SV’s new gameplay features!

◆Introducing the next level of mutant blasting action!

The action in Blaster Master Zero 3 is more intense than ever! We’re introducing the new action systems you’ll encounter as you control Jason and his battle tank, G-SOPHIA SV! Be sure to check them out before you try the demo!

Jason now has the new “Lock-on Shot” and “Hover” abilities in side-scrolling stages! In top-down stages, he can now use the “Spin Dash”! 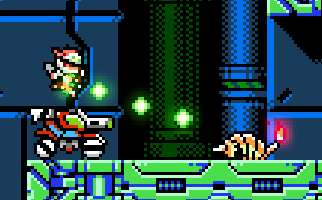 Press the shoot button right as Jason disembarks to unleash a barrage of shots at nearby enemies! 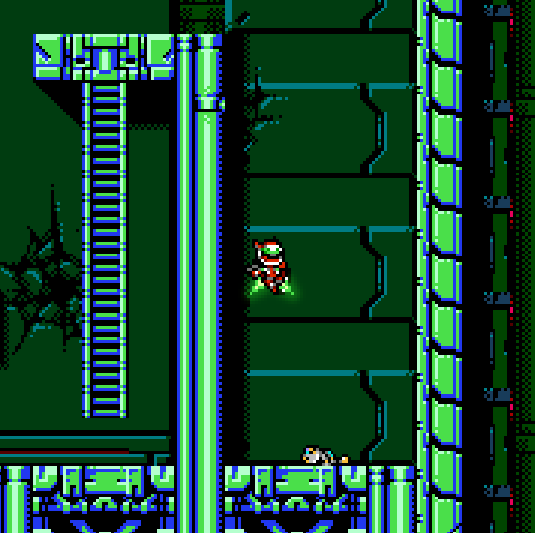 Use the Jump button in mid-air to hover.

With Hover, Jason can descend from tall heights safely! 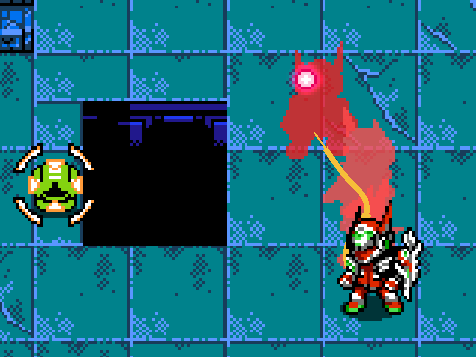 Spend some of your CP gauge to quickly perform a short dash.

Save some CP to dodge attacks in those challenging boss fights!

The Gun Level system has been completely revamped. Up until now, the weapon types available to Jason would increase and decrease along with his Gun Level. Now, all 5 weapon types are available at all times and the Gun Level will power them up! Choosing the right weapon for the occasion is more important than ever!

Increase your Gun Level to charge its shots.

Fires shots in a spread pattern.

Level up to increase its range.

Press the Shoot button to lock on.

Once locked on, hold the Shoot button to unleash a lightning attack.

Level up to increase the lock-on range and number of targets.

Leaves damaging energy in its wake.

Level up to increase its range and rate of fire.

Now up to 3 different types of counters can be activated with the press of a single button!

*New counters will be unlocked as you find them throughout the game. 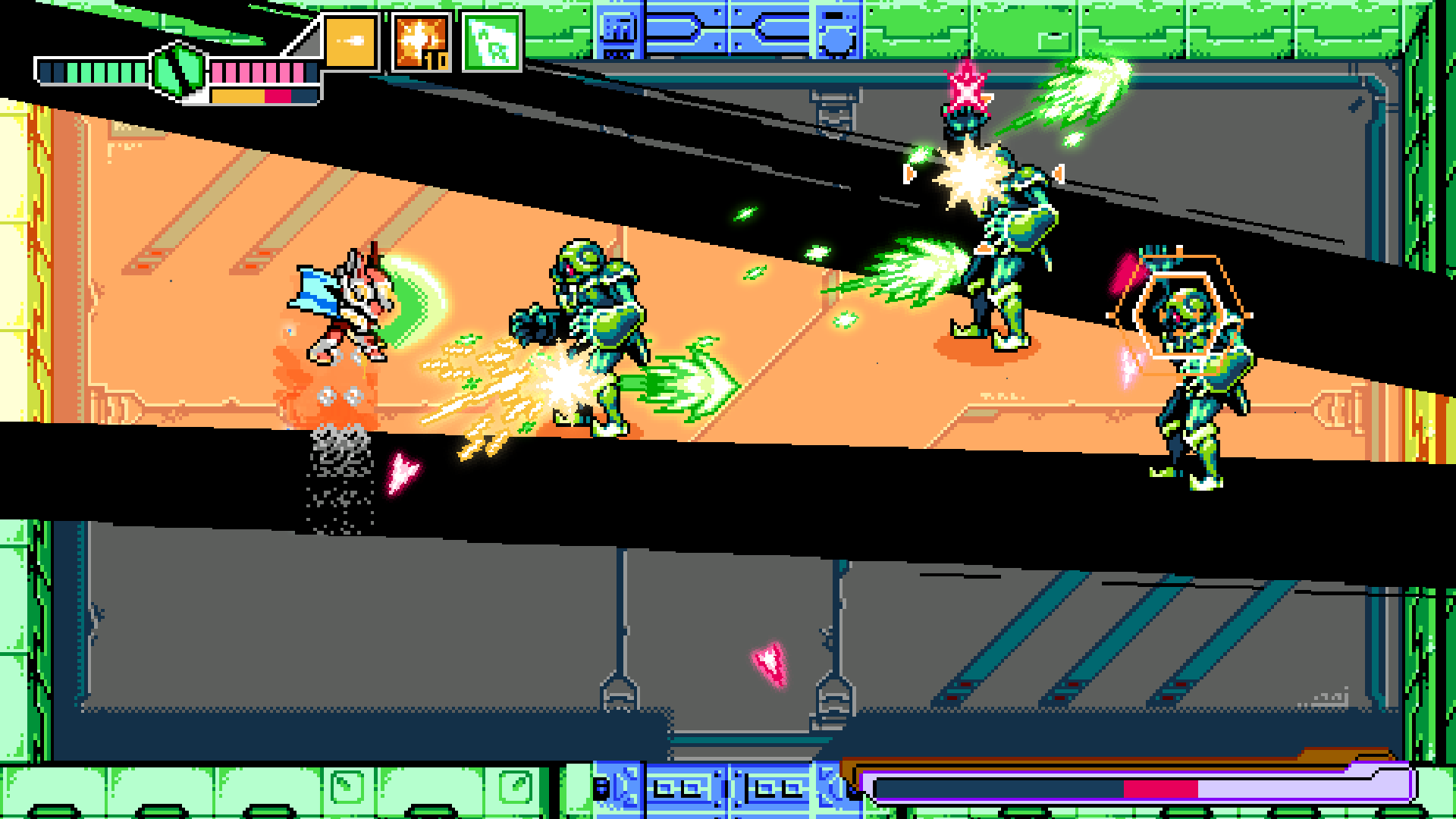 Press the Counter button the instant an enemy attacks to activate.

Fires a wave of powerful shots from long range. 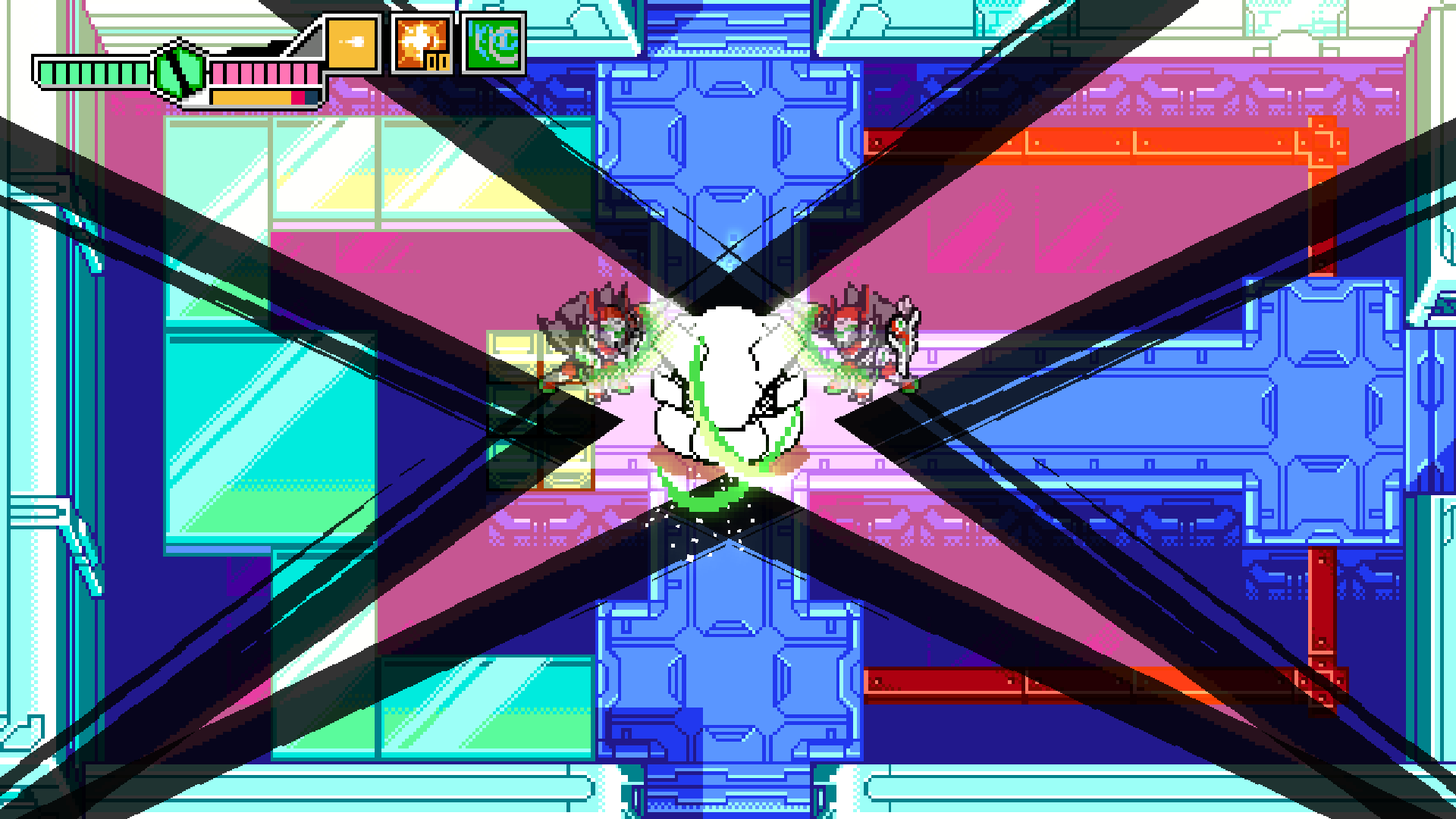 from touching an enemy to activate.

Launches into a powerful close-range attack.

If the counter is successful, received damage will be restored and the Gun Level will increase. 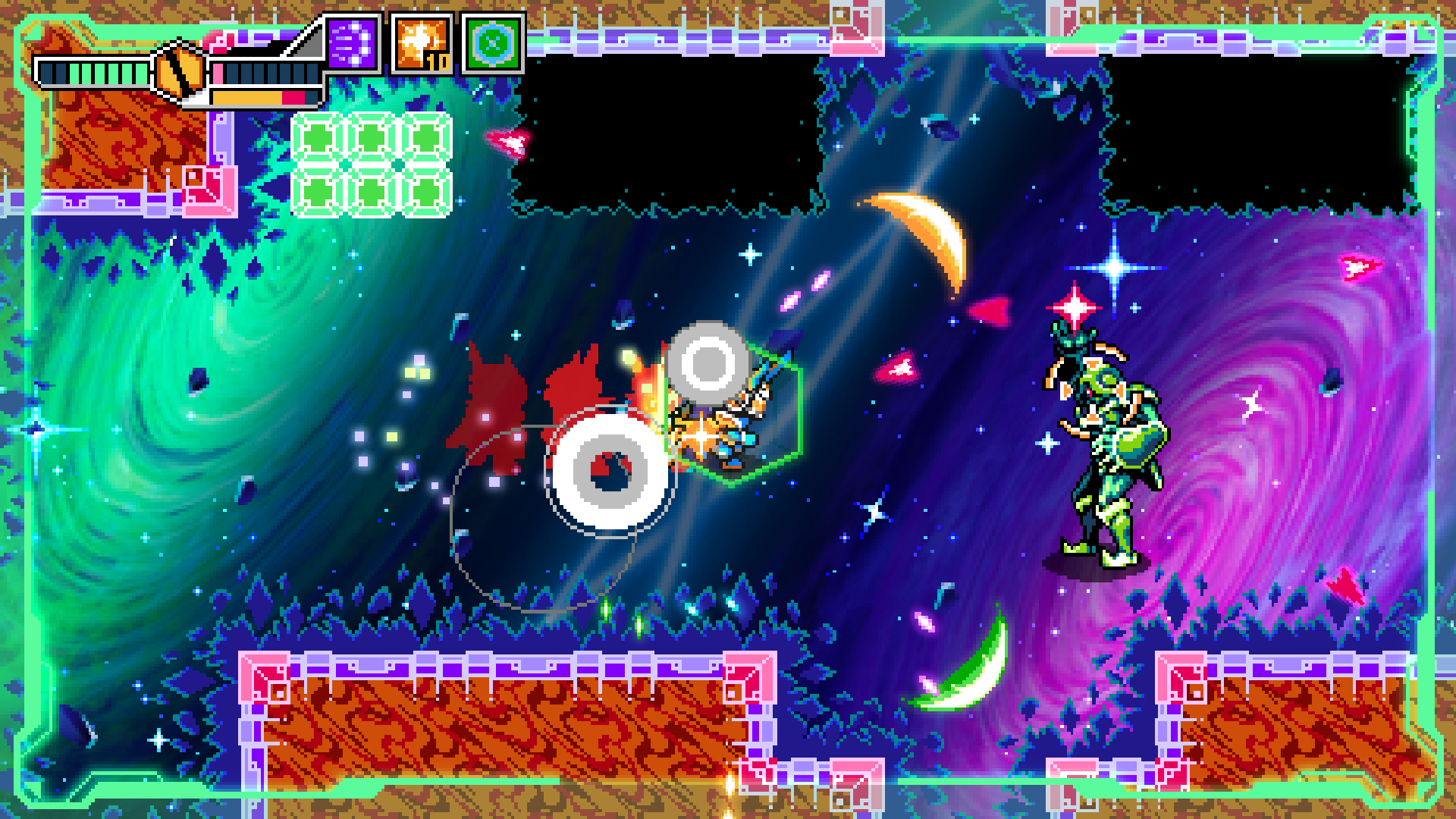 Adds a reflection property to the Spin Dash.

If the counter is successful, sub-weapon stock will be restored.

In the previous game, draining G-SOPHIA’s SP with cannon fire and sub-weapons would cause a system shutdown and put the player in a tight spot. G-SOPHIA SV has been equipped with a new Dual SP system to help prevent those situations, splitting the SP into two reserves: “Main SP” for the main cannon and “Sub SP” for sub-weapons and maneuvers. Now G-SOPHIA SV’s arsenal of abilities can be used more freely than ever!

When running out of SP and causing a system shutdown, the risk is now split in half. Draining one of the two SP reserves will still leave the other available to help fight through tough spots! However, draining both SP tanks will cause a “Full Shutdown” that leaves G-SOPHIA SV extra vulnerable to enemy attacks! Make sure to recharge your SP by falling from heights and other impacts using the “Gaia System.” Don’t miss a chance to fill your SP! 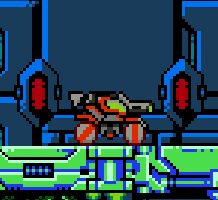 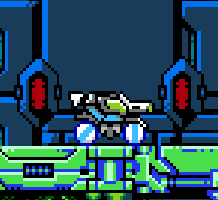 However, powerful main cannon weapons are still available to fight off any enemies that come your way. 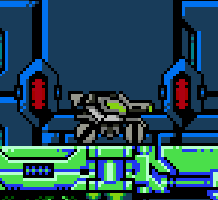 Make sure to use the Gaia System to recharge SP whenever possible to avoid this dangerous state. 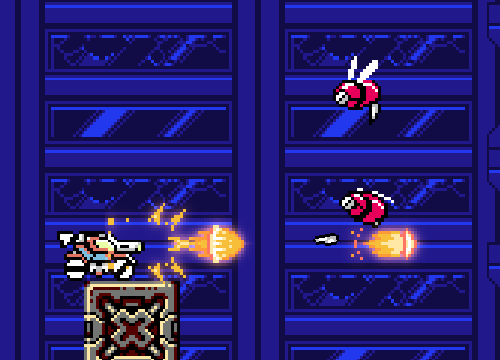 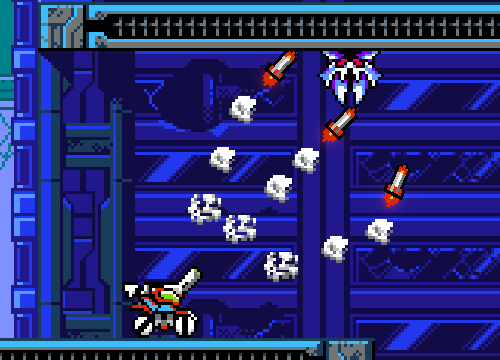 Fires a wave of 3 missiles. 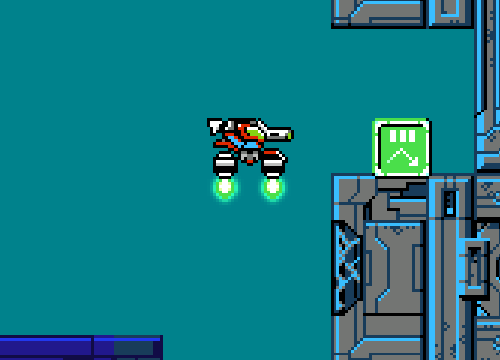 Allows G-SOPHIA SV to float through the air.